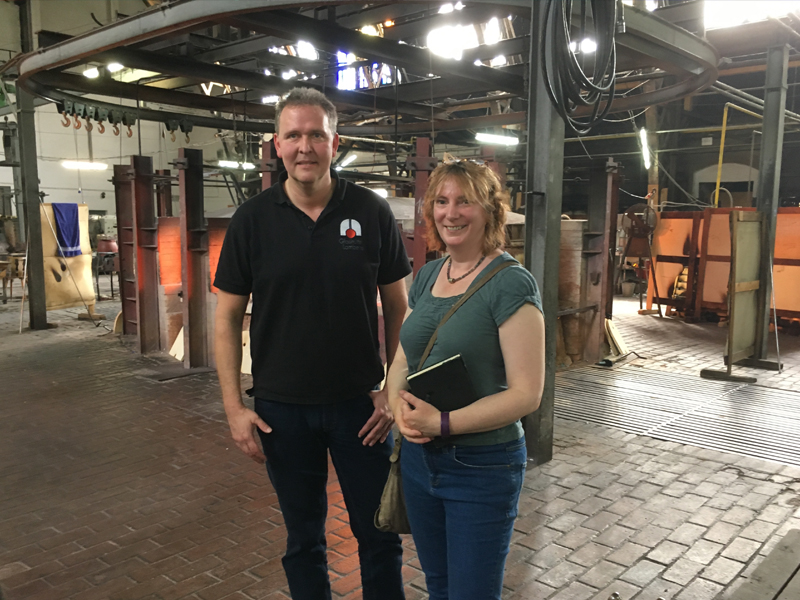 ‘Cylinder’, ‘antique’ and ‘mouth-blown’ are all names for the same beautiful glass that is intrinsic to many stained glass artists’ pallet, including mine.

In the early days, once I had figured out that antique glass was vastly superior to machine glass, I made a commitment to use it exclusively in my work, despite the extravagant cost. If you start with the best materials it stands to reason you are going to end up with a better quality product.

My pallet has grown over the years, and shrunk again, until I found myself scrabbling around the cullet box looking for tiny scraps of glass to complete a project. I needed to go shopping!

While I love English Antique Glass, they simply don’t make certain flashed colours that I need – a deep, rich brown and a Payne’s grey for example.

I met with Robert Christ from Lamberts when he was in London on a trade mission sponsored by the German government. He assured me they had thousands of colours and many of them were flashed. He suggested I bought their standard sample box for €100 and then I could order the glass from Pearsons and have it delivered. But that didn’t solve the problem, as the colours I wanted weren’t in the box. Finally, he invited me to visit and see the range for myself.

Lamberts is located in Bavaria, within walking distance of the Czech Republic. I’m in Surrey, 700 miles away. My first instinct was to jump in the car with drive, do some shopping and drive home. It would take 12 hours each way and cost £450 (petrol, Chunnel and breakdown cover). I then researched public transport – train to Stanstead, flying to Nuremburg, train to Marktredwitz and taxi for the last 10 miles to Waldsassen. It would still take 9 hours each way. To fly to Munich and hire a car would be £320 including petrol and airport parking. Added to the last two journeys would be the freight to transport the glass home, around £200. I finally decided on the simple and direct option.

I found someone to share the driving with and we left Surrey before 6am and took turns at the wheel. The autobahn has no speed limit and while we bombed along at 100 miles an hour in my battered old Vauxhall smart German cars were constantly overtaking us. I don’t think we saw another GB car once we were out of France.

Fourteen hours later we arrived at the small and quiet town of Waldsassen. Lamberts glass was incorporated in many of the buildings.

The Glashuette (literally ‘glass-hut’) wasn’t on a grim industrial estate. It was right in the town a few minutes walk from the hotel and when I visited it the following morning I was transported back in time. The manufacturing hall is vaulted like York railway station, and the tall brick chimneys are still in use but with state of the art filters. While high tech innovations have been introduced to make the glass more eco-friendly, there is no getting away from the fact that the process has not changed for hundreds of years. Seeing it happening before my eyes was exhilarating.

The hall was hot, noisy and busy. Teams of burly men worked with clockwork precision. The Beginner took the right amount of molten glass from one of the furnaces and worked it into a balloon shape in preparation for the Master to blow. The Master worked quickly, constantly turning the molten glass as he blew down the long pipe. Once at the right size the Assistant to the Master took over and shaped the cylinder. The Carrier took the finished cylinder to the annealing kiln after the Master had checked it. The whole process took less than five minutes.

During the six-hour night shift four teams each produced 93 sheets of antique glass. I arrived at 9am in time to see the last sheets of the night being made. The Restoration glass involved swinging the red-hot cylinder to lengthen it and create a thin, even glass. 140 sheets of Restoration glass are also made each night.

I saw the cylinders being scoured and put on a conveyer belt to in the annealing kiln and coaxed flat by the Flatten Master. At one point I stood next to the furnace and the heat was unbearable. No wonder the workers wore T-shirts!

There are currently two furnaces at Lamberts that are constantly burning. They take 10 days to cool down and are only turned off every few years for cleaning and resurfacing. A third furnace was being built that will be used for making slab glass. Like an iceberg, only a small part of it is on the surface, the rest being underground.

Lamberts glass is noted, not just for it’s beauty, but also for its consistency and ease of cutting. The colours, made from various metals including gold, are affected by slight changes in ambient temperature so meticulous tests are carried out to ensure the batch can be replicated. The uniform thinness of the glass is a testament to the skill of the Master. It takes around eight years to become a Master and there are only six at Lamberts. Given that they are the largest company making cylinder glass in the world (the others are St Just in France, Tatra in Poland and English Antique Glass) it is possible that only a dozen or so people are keeping the skills alive. Lamberts is known to glass artists around the world and they export 70% of their stock, and yet most Germans have never heard of them.

And then Robert took me to the showroom, the bit I’d really come to see. We walked past racks and racks of beautiful glass. I was on a mission for flashed glass so I reluctantly turned my back on all the seductive streakies, ravishing reamies, cracking crackles and peerless pots. My love is for transparent glass so it was relatively easy to ignore the oodles of opals.

A young chap called Max was assigned to help me. It took me over an hour to peruse the sample rack and narrow down my choice of flashed glass to around twenty colours, many of them murky greys and browns. There is a surcharge of 15% for buying a single sheet and 5% for buying two to five sheets. Once I’d made my selection, Max pulled the sheets of glass from the racks and I was able to select the ones I liked. Invariably I choose the smallest, and had two small ones rather than one large one, as this kept the cost down. Some of the greys were thick with dust and Max told me they were older that him. He did perk up when I selected a vivid red, and said it was a very cool colour. Without actually telling me to hurry up, he let me know that all the staff were knocking off early to watch the world cup, and predicted an easy win. I took the hint. Robert invited me to watch it with them all at a local football club. Many of the 70 strong staff live locally and some families have two generations working at Lamberts. Luckily I declined and thus avoided witnessing the humiliation of Germany crashing out at the hands of South Korea.

I returned the following day to make a few final selections (a couple of streakies did get through) and collect the samples of the colours I couldn’t afford but wanted to have for future reference (no charge for those). The final bill was over €6,000 and they accepted cash or card payments. I put some of it on an international credit card so no fees were charged and the rest on a debit card. I later found a fee of £75 was added to my bank statement for using the debit card.

The glass was carefully loaded into the boot of the car. I’d taken the mattress from the sofa bed to act as a buffer. There was an intense consultation in German between the packers, with me unhelpfully questioning them. They laid the sheets of glass on a piece of foam, starting with the largest, and with a single sheet of corrugated card between each piece. Foam strips were put around the pile. The weight of 40 pieces of glass, they assured me, was no more than two people. Not a single piece broke on the return journey.

Driving a heavier car home we ground to a halt around Brussels where the European summit had just finished. As we crept along in the heat wave I reflected on the temperature the glass blowers worked in each night. Tuning into an English radio station we heard dire warnings about the UK leaving the EU without a deal. My stash of glass would last a while, but popping back to buy more might be harder and more expensive in the future.

Unpacking my glass back at the studio, I was a tiny bit disappointed that I had so many dark and muted colours and only a few bright ones. Then I reminded myself that it is those unsexy colours that let the others shine. I am already dreaming of a road trip to St Just and returning to Lamberts for more. I think I have a problem with glass addiction!

I have made 40 samples of Lamberts flashed glass, previously unavailable in the UK, and sent them to Reading Stained Glass. Artists in the South East can now order sheets through Pearsons without travelling to Liverpool. I can produce a couple more sample sets for the stained glass community, if required.

Antique glass is eye-wateringly expensive. But in my opinion it is worth every penny, which is why I use it when teaching. If beginners are exposed to mouth-blown glass they will fall in love with it too. We need the industry on which we depend to stay alive and well. The more people who use and specify antique glass the better we will all be able to survive and create new artworks in the future.