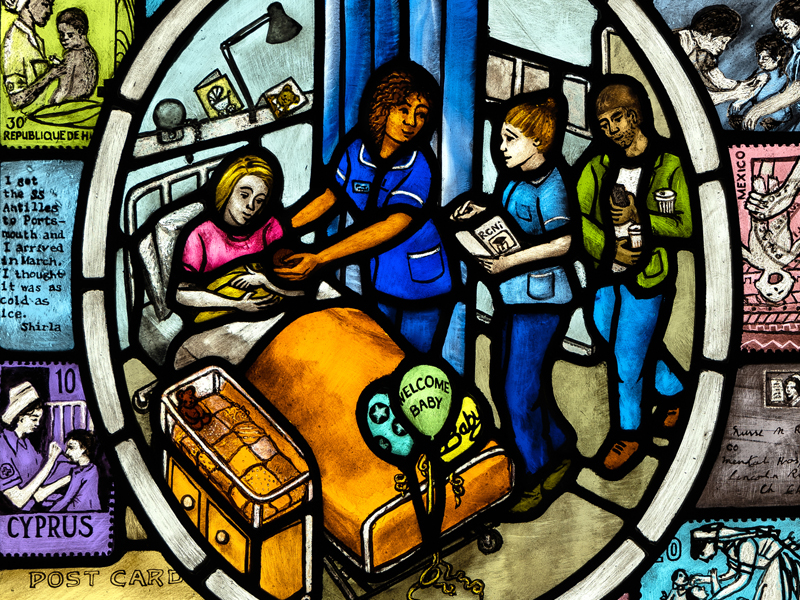 The Royal College of Nursing in Cavindish Square, London, are hosting an exhibition exploring the emotions of nursing. It opens on 25th January and is called Who Cares? My latest artwork forms the centre piece of the exhibition.

Back in October 2018 I was approached by the curator, Sarah Chaney, about involving nurses in some stained glass workshops that explored the emotions of nursing and then creating an artwork in response to the discussions. How exciting!

I began the workshops with no clear idea about what the finished stained glass would look like. As I heard from professionals from all fields of nursing, I realised there were too many aspects to include in a single panel. I wanted to incorporate as many of the stained glass tiles made by the workshop participants as I could. And so the idea formed of splitting the different aspects of nursing into three panels that reflected the start of life, mid-life and end of life. The central oval shows a vignette, or scene, loosely drawn from my personal experiences. I used the borders to explore further ideas and include the delightful tiles the nurses had produced.

The exhibition triptych entitled Nursing Life will be on display for two years. Hopefully a permanent home will be found for it eventually and it won’t end up in a dusty archive.